DUH has chosen not to seek 501(c)(3) status deliberately so that we can endorse specific candidates and legislation. From 2014 - 2018, in order to gain DUH's endorsement, a candidate must have not only said he or she supports UNIVERSAL SINGLE-PAYER HEALTHCARE FOR ALL, but they had to walk their talk consistently when speaking, appearing at public events, in what they wrote, and most importantly, in their voting record if they had held public office.

November 6, 2018 was an election day upon which we had a chance to cause a tsunami of change in Congress. We made definite progress in taking control of the House, but we failed in the Senate. We've seen stunning performances by freshmen Progressives defying "the way things are done," including challenging corruption and greed, even among House "leadership." It's clear that the New Way is here to stay.

If every elected member of the House had the self-imposed idea of serving for two years, they wouldn't be on the phone drumming up money for the Democratic or Republican Party - they'd be governing and at the end of the two years, they could run for re-election ON THEIR RECORD.

It seems only right that DUH learn from its past lessons, so we are trying a New Way of our own, unlike the DNC. First, we expanded our reach by creating an "all causes" wing with our People Energizing Politics (PEP) page on FB, currently (mis)named Politics Energized by the People's Participation. Though healthcare will always be our first priority, we are now embracing the climate crisis, poverty, immigration, war, LGBTQ issues, Native American sovereignty, criminal justice, racism, women's rights, education, and the imbalance of wealth and power both within our boundaries and around the world, along with any cause that affects the lives of all Americans and those who want to be American citizens.

We are also endorsing incumbents - some old, some new - this time around. Their names will appear in purple and they will be endorsed officially as soon as I have a chance to put them up. Incumbents' videos will be of a moment from the 116th Congress, social media, or their campaign website and therefore, of varying length, though we'll try to keep it short. We'll also provide a link to their government website.

In endorsing newly running candidates, we've taken what we learned from 2018 and developed our new endorsement policy and process, including establishing some standards that candidates must meet in order to earn our endorsement that have nothing to do with raising money.

Also, because we anticipate even more new Progressives running, I had to come up with a way to list the candidates on the page that was fast and efficient. So starting as soon as new candidates know they will be on the ballot, we'll decide whether or not to endorse them. The ones we endorse will be featured under their state with their photo and links to their video and website.

*NOTE: Due to COVID-19, some of the following about campaigning doesn't apply, but I'm leaving it in because it's still true, even though you may not be able to do it in person.

You should have a good, short video on the Home page of your website. ONLY YOUTUBE videos can be posted on this website due to its functionality. You can provide a link for a video from any platform which will be included in your section on the U.S. House & Senate page. Please make sure the video quality resembles Star Wars more than The Blair Witch Project and sound quality is good enough for 70-year-old ears! If you're young, slow down your tendency to speak at warp speed if you want your voters to understand you.

Social media pages do not replace a website. Neither do the limited, scripted websites provided by Justice Democrats and Brand New Congress. Your website should be unique to you and include written text, as well as photos/good video of you interacting with your voters and text/video of your position on the issues (and why). While the JD and BNC templates are better than a FB page, the worst thing is repetitive language. If all you're saying is what every Progressive is saying, you might as well be spouting the DNC party line. (see CREATE)

Not having your own website counts against you. There are plenty of free or cheap website programs available that will allow you to express your positions and your bio uniquely to you. Get a young, computer-savvy friend, family member, or volunteer to help create and maintain it if you can't afford a pro.

BE VIABLE And we don't care about how much money you raise except to know that you aren't taking corporate/lobbyist money, but rather relying on individual donations. If you know you can't raise the money you'll need to compete with the opposition, wait to run until you can. Ask yourself to follow Eric Swalwell's example - be realistic. If you're running against an entrenched corporate-owned incumbent, especially one the DCCC has picked to sabotage any Progressive upstart, you may be trapped behind barriers worse than Trump's wall. Smart candidates are honest with themselves, think about worst-case scenarios, and prepare their strategy accordingly, even if that strategy ends up being to wait until a better time. Also, be politically astute and if you don't have a chance in hell, withdraw and throw your support to the best candidate who does! There may come a day when someone does that for you because

LOOK like a serious candidate if you are one. We don't care what party you're running for, but if the first image voters see of you is in a stained tie-dyed t-shirt, jeans, and Birkenstocks, that's a strike against you, especially if you're running against an established incumbent. Male or female, get your hair cut, invest in one suit that fits you well and can be accessorized for different looks. Think about how you'll look in that first freshman class photo - will you fit in enough to be taken seriously, with individuality that says, "I'm not the same old thing," or will you be dismissed (especially if you're from a state with legalized recreational marijuana) as just another schmuck with a hard-luck story or a home-birthed, home-schooled child of parents or grandparents who were actually AT Woodstock?

SOUND like a serious candidate. Incorrect English is unacceptable in someone who wants to be in Congress. I'm not talking about regional accents, but rather things like double negatives, bad pronunciation, using nouns as verbs (all too common these days), or Trumpish malapropisms. You will be joining lawyers, doctors (MDs and PhDs), long-term legislators and if you aren't articulate and speak with confidence, you'll be dismissed. Watch some videos from C-SPAN and hear how AOC, Ayanna Pressley, Katie Porter, Jahana Hayes, Joe Cunningham, Veronica Escobar, and Joe Neguse sound and aspire to follow their examples. If English is not your native language, like Ilhan Omar, watch her and see that it's possible to be passionate and polite even with a "foreign" accent as long as your voters can understand you.

CREATE a compelling platform - Though it's tempting to use established progressive language, think about ways to make your position stand out from the crowd. Potential endorsers will watch multiple videos and if they hear the same words parroted over and over, you may not get the endorsements you really want. Think about the fact that there has never been consensus about what to call the healthcare system we want. The title of HR 676 was "Expanded & Improved Medicare for All" - too long; "Medicare for All" ties it to Medicare as is, which is NOT what we want at all; "National Improved Medicare for All," or NIMA, is almost there, except still ties it to Medicare. What would YOU call it? Is it "environmental pollution," "climate change," or "climate crises?" Make the issues your own by creative yet consistent language!

YOUR STORY - In 2018, most candidates went with the "my life is just like/was harder than yours" approach. Almost all of them lost. It's one thing to draw parallels between your life and the lives of your constituents, but especially now, people are starved for positive messages and overcoming hardship, especially when it was due to your own poor choices, is admirable but not enough. You have to tell them how you'll make it possible for them to overcome theirs. Bottom line - voters care more about what you'll do for them than what you've done for yourself.

*SHOW UP - You can't win an election unless you're out there with voters. We want to see photos and video of you at town halls, at your local farmer's market, speaking on panels with other candidates, doing TV news, radio, and Internet interviews, etc. This is where it's important to have someone on your staff (paid if possible but a reliable volunteer with admin or event planning experience can be just as good) to prioritize and organize your schedule so that you take advantage of every opportunity to appear before your constituency.

OVERCOMING COST may seem like the biggest hurdle you face, but you live in an age when technology can offer you a variety of ways to knock it down. Free website, email functionality, bookkeeping, scheduling, contact tracking, even fundraising programs are now available for everyone to use to their advantage. Organizations that support your candidacy may not have money to donate, but, like DUH, we DO have other ways to promote you. We at DUH commit to getting your name, face, and story out to the general public and your constituents via our social media platforms and website. Also realize that what works with different generations of voters doesn't work with others. Older voters may prefer face-to-face contact at their door or a phone call, especially if they're concerned about COVID-19 and don't live in urban areas where no one opens their door to a stranger. Younger voters may prefer no personal contact at all as long as your website and social media grab their attention and are updated regularly. If they're like me, those expensive mega-postcards covered with shots of you and your smiling family and a load of politispeak go straight into the recycling bin - NO ONE likes those! I think yard signs are a more effective use of your small budget, especially if you have a name recognition problem and your opposition doesn't. But that's just me.

IT'S UP TO US - YOUR CONSTITUENTS!

Only if we on the Left - Progressive Democrats in more than name only, Independents, dissatisfied Democrats and Republicans, Democratic Socialists, and other third-party voters - are informed and make choices that serve our own interests and achieve the best results for our state/country. Then that "blue tsunami" can finally wash away the corrupt, fraudulent, hateful, profit-driven morass that is our current government. But we still have to get off our asses and turn the traditional "Lefties don't turn out to vote" into "The Progressive turn out was massive!"

Ask yourself one simple question your voters will (or should) ask - "Will things get better for me/the state/the country if he/she is in Congress?" If the answer is yes, or not much, maybe you'll win a term to prove you're the real deal. If the answer is NO, you'll lose or, if you're an incumbent, you'll have to find another job! 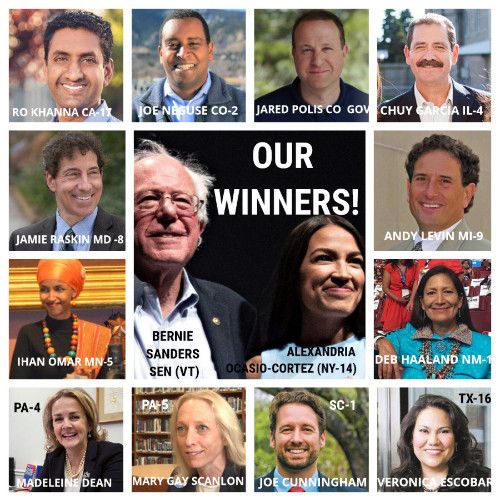