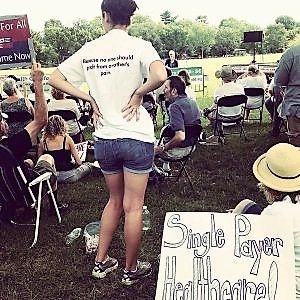 It was during our 2014 West Coast tour that Dr. Bill Honigman suggested that we organize a rally on the National Mall in 2015 in order to celebrate the anniversary of Medicare being signed into law. On August 1, 2015, the Healthcare Justice March became a reality.

The HJM, as we called it, was the result of over a year of envisioning, planning, applying, calling, emailing, inviting, posting, and tweeting. There were times of deep despair, frustrating stagnation, surprising celebration, just as deep satisfaction, and exciting exhilaration. To those who thought it was a stupid idea not worth supporting, thankfully, we didn't listen. No, we didn't raise as much money as we needed. And the numbers weren't what we hoped. But the people who were there were great and the day will always be one of DUH's proudest. None of it would’ve been possible without the people who donated, endorsed, and volunteered; the 271 who showed up out of 1,200 who registered and most of all, Donna Ellington, who was Sue’s right arm every step of the way. 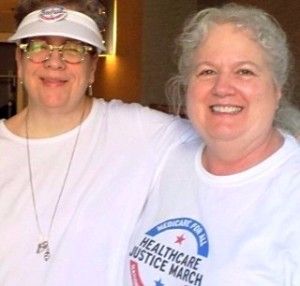 We learned valuable lessons from the experience of planning, organizing and seeing the HJM come to life, some of them being very disheartening, some of them amazingly encouraging. We will not be so naive or idealistic about future events, nor will we ever discount the efforts invested by many and the dedication of the crowd who showed up. We will appreciate and nurture the connections we made along the way and not waste time trying to jump through hoops or overcome barriers borne of ego and petty politics. We will never fail to be grateful for the six organizations and 92 individuals who responded to our appeals for support by donating a total of $10,000.

Whether or not others consider the HJM to be a failure, we are proud of the fact that no matter the obstacles we faced; no matter the betrayals and needless drama; no matter the constant struggle with raising money and losing more and more production value until we even had to give up having a stage, WE DID NOT GIVE UP! We never will either, until our work is done and everyone living in the U.S. has the healthcare they need!