Does America need Healthcare for All? DUH!

As 2021 brings more and harder struggles as we deal with COVID-19, millions of jobs and small businesses lost (along with employer-based health insurance), homelessness, hunger, racist violence, and more abject poverty than we ever expected to witness, let alone experience in the United States, polls show that healthcare is still, beyond mere survival, the number one issue on the minds of American voters. Over 70% of people everywhere on the political spectrum favor "Medicare for All," - we prefer to call it Healthcare for All, since that is what we want, NOT Medicare as it is now. The 117th Congress is now controlled by Democrats in both chambers, though the Senate is tied and will need the Vice President's tie-breaking vote, including a freshman and sophomore class NOT bought by corporate money, and we have a realistic chance for progress. Add to that, the foundational disruption of life as we know it due to the coronavirus and even the staunchest Republican might support giving single-payer at least a temporary try. If Republicans were smart, they'd grab the whole gold ring and take Richard Nixon's 1974 words to heart - “Without adequate health care, no one can make full use of his or her talents and opportunities. It is thus just as important that economic, racial and social barriers not stand in the way of good health care as it is to eliminate those barriers to a good education and a good job.”

Whatever this year brings, we must welcome ALL those who are committed to seeing the U.S. provide healthcare - as defined in H.R. 1364 (or whatever number it turns out to be) - to everyone residing here. We gratefully welcome Libertarians and yes, Republicans like members of the FB page Republicans for Single Payer and others. We must be united and relentless in our demand, no matter our political affiliation, our physical ability, or the methods we employ to amplify our DEMAND for UNIVERSAL HEALTHCARE!

This is our time - JOIN US in making it a historic one!

THE WINNERS WE ENDORSED IN 2020 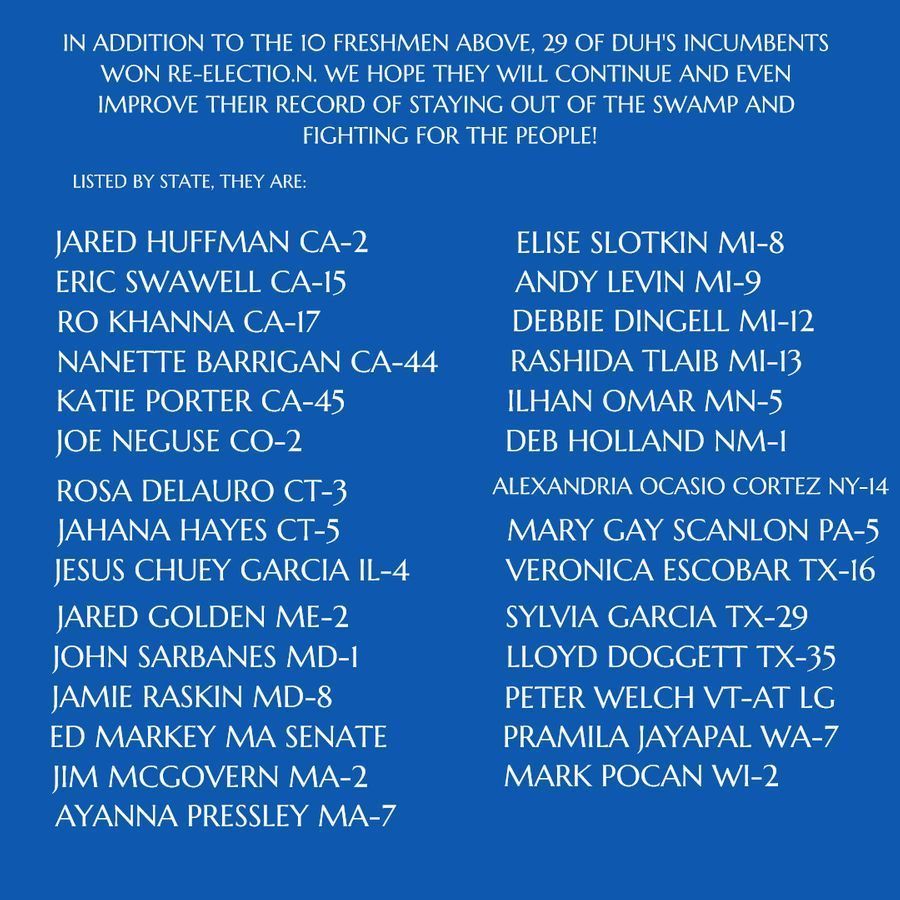 It used to be that we'd have at least a month or two to recover from the exhaustion and drama of a presidential election...but no. Thanks to Trump's lies,    manipulation, lust for power, and the sycophancy of sheeple like Ted Cruz, Josh Hawley, Rand Paul, and a variety of neoNazis, the 2020 cycle took way longer and, let's face it, won't be 100% over until Trump is broke, in solitary confinement for life, committed to a facility for the criminally insane, or dead.

Nina Turner was the first to declare and we immediately endorsed her, unable to even imagine another Progressive who could mount a viable challenge. However, Nina was (and always will be) a unique case and we are struggling with establishing a consistent policy on when to endorse. The FEC hasn't put out filing deadlines yet and if 2020 was normal, it will be a while before we have that information.

Because each state has different filing deadlines, it's impossible to be fair to the candidates from states with late dates. Therefore, we're going to try setting our own cut-off date of June 8, 2021. Any candidate who wants our endorsement and who has either filed or publically announced that they're running, should reach out and let us know!

So the point is here we are a year and eight months away from the election and the race is on! With everything that has happened since 2016, there is NO EXCUSE for ANY politician who will not sincerely work to improve your life to be elected. For instance, if Ted Cruz gets one vote more than his family members give him, I give up. I have such faith in all the voters who have and will continue to wake up, even Republicans who remember or have heard of the way the party was when it was possible to be equally conservative and compassionate at the same time, when quality of life reflected the health of democracy and everyone wanted our democracy to be the shining example it could be. Lincoln Project guys and followers, that's you! Maybe I'm naive. But in 2016, I was told smugly that the only thing Democratic leadership cared about was winning so they would nominate Bernie over Hillary if he was most likely to win. HA! After 2020, it's clear that the only thing they care about is beating Bernie and the Progressives that will continue to fight for his agenda. I can tell you already that in 2024, it will be Kamala Harris no matter that the Progressive running draws crowds of thousands, leads in all polling, and raises millions from people giving under $100 while Kamala draws crowds of a few hundred, lags in polls against the Republican, and is selling access at $10,000-a-plate fundraisers. By then, there may not be an iconic civil rights leader in Congress who will time his endorsement of her such that any other Progressive or psuedo-Progressive would also endorse her as they drop out. We'll see, but I prefer to have faith that we have or will finally vote in our OWN interests. Prove me right.